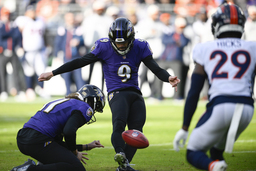 PITTSBURGH (AP) The faces on the field keep changing. The stakes when the Pittsburgh Steelers and Baltimore Ravens meet do not.

Ben Roethlisberger's retired. Lamar Jackson is hurt. It hardly matters. Not when Mike Tomlin and John Harbaugh are on the sideline doing what they've done for 15 years and counting: attempting to prime their teams for a late surge that will shape the playoff race in the AFC North.

"It takes two to tango, and they're a great dance partner," Tomlin said. "Collectively, man, we've produced some quality moments for football lovers. It's just cool to be a part of something like that."

Albeit anxiety-inducing at times, though neither Tomlin nor Harbaugh would have it any other way. Their 32nd meeting - the second-most by two head coaches in NFL history - carries a vibe similar to the first 31. Even with the Steelers (5-7) in essentially a transition year with rookie quarterback Kenny Pickett taking over for Roethlisberger in Pittsburgh and the Ravens (8-4) eyeing the start of a stretch run without Jackson, who's dealing with a knee injury and could be out multiple weeks.

"I understand it's still the Steelers, and you've got to come with that mindset regardless of who's out there - that you've got to go out there and play your best ball," Ravens linebacker Tyus Bowser said. "So, it would be nice to still have him (Ben Roethlisberger) there. He's a great player, (and) I definitely respect him, but I'm looking forward to this week."

Pittsburgh has won three of four to breathe life into its very faint postseason hopes, though the Steelers' wiggle room is essentially gone thanks to a 2-6 start.

While Baltimore is in a far more comfortable position, nothing has come easy. The Ravens needed a last-second touchdown dive by backup quarterback Tyler Huntley to escape against Denver and now head to a place where they've only had sporadic success with a quarterback who is just 1-3 as a starter.

The Steelers have won four straight in a series typically defined by rugged, low-scoring affairs. It figures to be more of the same this time around.

"I feel like both teams go out and get tough players, gritty players," Ravens safety Chuck Clark said. "When those two teams clash on the field, that's what the result is, that you see a tough, hard-fought game all the time."

Pickett spent five years next door at the University of Pittsburgh, essentially getting absorbed into the rivalry through osmosis. He has overcome a shaky start to his career by settling down in recent weeks, avoiding the kind of mistakes that plagued him earlier in the year to help the Steelers reach the fringe of the playoff race.

A loss and Pittsburgh's improbable shot at playing deep into January likely disappears. Then again, isn't that what Tomlin lovingly refers to as "December football' is all about?

"I think the intensity is amped up, obviously," Pickett said. "It's a big week. If you keep winning, every game gets bigger. So, that's what we're going to continue to just focus on, coming out of stadiums with wins."

Huntley is no stranger to the Steelers. He started in place of Jackson in the 2021 season finale, throwing for 141 yards and running for 72 more in what became a 16-13 Pittsburgh victory that helped the Steelers slip into the playoffs.

He hardly looked cowed by the stage last week against the Broncos, calmly leading the Ravens on a 91-yard drive in the final minutes, covering the last 2 with a designed run that was Jackson-esque.

"(Huntley) has a good command of the offense, (and) the guys trust him," Baltimore tackle Morgan Moses said. "That's the biggest thing - is trust. Trust that he's going to do the right thing to lead us, and I know he's preparing hard. He's been around; he's played a lot of football."

Steelers rookie wide receiver George Pickens has already put together a resume filled with impressive catches during the first 12 games of his career. He also, however, is still learning how to control his emotions.

Cameras caught Pickens demonstrably upset during last week's victory over the Falcons, a game in which he had just one catch for 2 yards while playing not far from where won a national championship last season at Georgia.

Pickens downplayed his behavior, saying he's hardly the first wide receiver who got upset because he wants to be involved in the offense. Tomlin and Pickett both came to Pickens' defense.

"George is a competitor," Pickett said. "That's the thing about receivers, you only get so many opportunities and that's why we have to definitely take advantage of the little ones that we do get. We'll continue to push forward."