ChiSox's Anderson lands video game cover; next up, a ring? 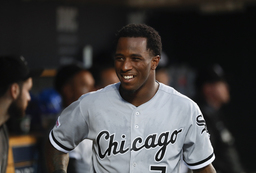 CHICAGO (AP) White Sox star Tim Anderson has landed a spot on the cover of a video game. He wants a World Series ring to go with it.

Anderson sees no reason why the White Sox can't win it all after loading up on the heels of a breakthrough playoff season.

"Anything's possible," he said. "That's always been the goal, to win the World Series, right? Never gonna shy away from that. ... I know what we can do."

Anderson spoke Thursday, hours after Major League Baseball announced he is the cover athlete for "RBI Baseball 21." The dynamic shortstop is the first White Sox player to be on the cover of the video game series, with the latest edition due out in March. It's more attention for a franchise opening eyes after being overlooked even in its own city.

"To get to this spot definitely shows that we've been working," he said. "I think all the work is showing - how hard we've worked behind the scenes and not just what you guys see. I'm definitely happy with the position we're in. We're in the right spot."

Anderson seems like a perfect fit for the cover, with his fun-loving attitude and big bat flips. He finished second in the American League with a .322 batting average last season after leading the majors at .335 in 2019. Along with AL MVP Jose Abreu, he anchors a deep lineup.

The White Sox made the playoffs last year for the first time since 2008 and ended a string of seven losing seasons. They tied Cleveland for second place in the AL Central behind Minnesota at 35-25.

The White Sox now have their sights set on their first World Series championship since 2005. And they've been loading up at a time when other teams are cutting costs.

"We added some pieces that we needed," Anderson said. "I think all those pieces are gonna help us. I don't really think it's about spending a whole lot of money. I think it's just doing what makes sense and getting pieces in there to really help us. They've really been making the right moves to kind of get to where we're trying to go."

The White Sox added one of the game's best closers when they finalized a $54 million contract with Liam Hendriks last week. But it wasn't Chicago's only big move.

The White Sox hired Hall of Fame manager Tony La Russa to replace Rick Renteria. They acquired Lance Lynn in a trade with Texas, giving them a durable starter to go with ace Lucas Giolito and 2015 AL Cy Young Award winner Dallas Keuchel. And they brought back veteran outfielder Adam Eaton, who helped the Washington Nationals win a championship in 2019.

"I think every guy that we've signed is gonna help us," Anderson said. "Those guys have been around. You know the history of those guys. You've seen what they've done over the years."