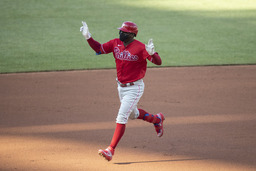 NEW YORK (AP) The Philadelphia Phillies will defer $9.5 million of the $28 million owed to Didi Gregorius under the shortstop's $28 million, two-year contract.

Gregorius receives a $1.5 million signing bonus under the deal announced Wednesday, payable in $500,000 installments on each Feb. 1 from 2024-26, according to details obtained by The Associated Press.

Philadelphia will pay the deferred salary in $2 million installments each Feb. 1 from 2023-26.