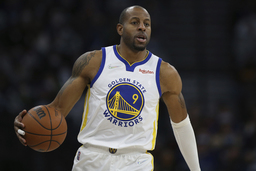 SAN FRANCISCO (AP) Andre Iguodala rode his Peloton bike a couple of times last week and took note that "I ain't in that bad of shape."

Now, he will see how that translates back onto the basketball court again.

After seriously pondering retirement all summer and all but deciding his playing days were done, the 38-year-old guard and forward is coming back for a 19th NBA season after signing with Golden State on Monday. The deal is for the veteran minimum and Iguodala is set to travel to Japan with the team Tuesday for a pair of preseason games this weekend against the Washington Wizards.

"The way information travels so fast now it's like you almost forget what we just did. We're still the champs and it runs all the way until we're not the champs, I don't know if it's 300 days or 600 days, but just basking in it because when you're going to look back like 25 years from now you're going to wish you embraced it a little bit more."

Iguodala heard encouraging words from Stephen Curry, Draymond Green and Jonathan Kuminga this summer about one last hurrah, and the 2015 NBA Finals MVP called it "a little bit of a rollercoaster" coming to his decision.

What sold him on one more season was a meeting with Warriors Vice President of Player Health and Performance Rick Celebrini, who met with Iguodala and established a plan to keep him healthy and balance playing time with proper rest and recovery. Iguodala played 19.5 minutes over only 31 games last season because of an array of injuries from a bulging disk in his lower back, a neck injury and a knee that required draining multiple times.

"If he had not mapped out that plan I wouldn't have been as comfortable," Iguodala said. "I think that's what kind of sealed the deal."

He rejoined the Warriors last season following two years with Miami and became a key presence as the Warriors captured another title, saying Monday, "I really just play for the joy of the game."

"Just makes my job so much easier because we have so many young guys and they need coaching, they need mentoring. Andre's the best there is with that," coach Steve Kerr said. "And he loves working with the younger guys. As a player he sort of makes everything work because he knows exactly where he needs to be and so he makes every lineup click and then if he's not on the court he's teaching these young guys the same thing. So Andre's a really crucial part of our whole program, thrilled that he's back."

Iguodala plans to look for his shot more regularly, even in a lineup featuring star Splash Brothers Curry and Klay Thompson.

"I need to score more, I'm actually looking forward to that," Iguodala said.

Curry and the others can't wait to see it after figuring Iguodala's career was done after beating the Celtics for the title in June.

"He's planting his flag now, which I think for him is a healthy way for him to approach this year, knowing he's giving everything he's got," Curry said. "The point of him coming back, there's a lot of talk about him being the mentor first, that's kind of the narrative a little bit. But he's not coming back if he doesn't think he can play and contribute, whether it's 10 minutes, 20 minutes. Big game creeping up, maybe even more, playing consistently maybe in the second half of the season.

"He's not here to be a coach first, player second."