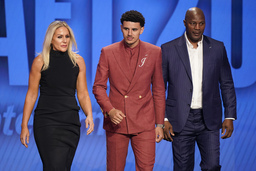 WASHINGTON (AP) During the interview process with Johnny Davis leading up to the NBA draft, Washington Wizards coach Wes Unseld Jr. realized this was a player with an impressive feel for the game.

"Talking to him, but also take him to the board," Unseld said. "Have him walk me through different situations, different defensive scenarios, and just see where he felt comfortable. He was able to draw plays and do some things on the board which were impressive."

The Wizards selected Davis with the 10th pick in Thursday night's draft, capping his impressive rise from role player to lottery pick. The 6-foot-5 Davis averaged 19.7 points per game as a sophomore at Wisconsin last season - up from 7.0 in 2020-21.

Washington took center Yannick Nzosa in the second round.

Davis earned first-team All-America honors for his contributions at both ends of the court, and now he joins a team that's coming off a disappointing season in which star guard Bradley Beal was limited by a wrist injury.

"The talent is there. That's what we're excited about," general manager Tommy Sheppard said. "With the 10th pick, I think that's somebody we could add to this team who's going to be a very big contributor pretty quickly."

The big question for the Wizards this offseason is whether they can keep Beal, but on draft night they added a tough wing who averaged an impressive-for-his-size 8.2 rebounds last season.

Davis led Wisconsin to a share of the Big Ten title, with a 37-point, 14-rebound performance at Purdue among the highlights. His outside shooting is a question mark - he made just 31% of his 3-pointers as a sophomore.

"The Washington Wizards are getting a proven winner, and the most competitive player in this draft class," Wisconsin coach Greg Gard said. "I've always said that Johnny's best trait is his competitive drive, which will help him stand out at the next level."

Draft day last year was when Washington agreed to deal Russell Westbrook to the Los Angeles Lakers. The Wizards replaced him with Spencer Dinwiddie, but he was also traded before the season was over, so Washington entered this offseason with point guard as a significant need.

It's not clear how much Davis can help the Wizards in that respect. Sheppard said he could play either guard position, and Unseld suggested Davis can help in a variety of ways.

"I don't want to put him in a box necessarily. He's a ballplayer," Unseld said. "He's adept at doing a lot of things on the floor."

Unseld was cautious, however, when asked if Davis could be a lead ballhandler.

"I don't know yet, honestly. I don't think he's been asked to do that at this point in his career," Unseld said. "To say no, I think would be jumping the gun. I think he can grow."

Davis became Wisconsin's first lottery pick since Frank Kaminsky was taken at No. 9 by the Charlotte Hornets in 2015.

The 6-foot-10 Nzosa, an 18-year-old from Congo, has played for Unicaja Malaga of Spain. A soccer goalie growing up, he started playing basketball at age 12.

Sheppard said Nzosa would remain in Spain next season.

"His age gives us a lot of time," Sheppard said. "He's got some years."